How Fast Fashion is Ruining the World 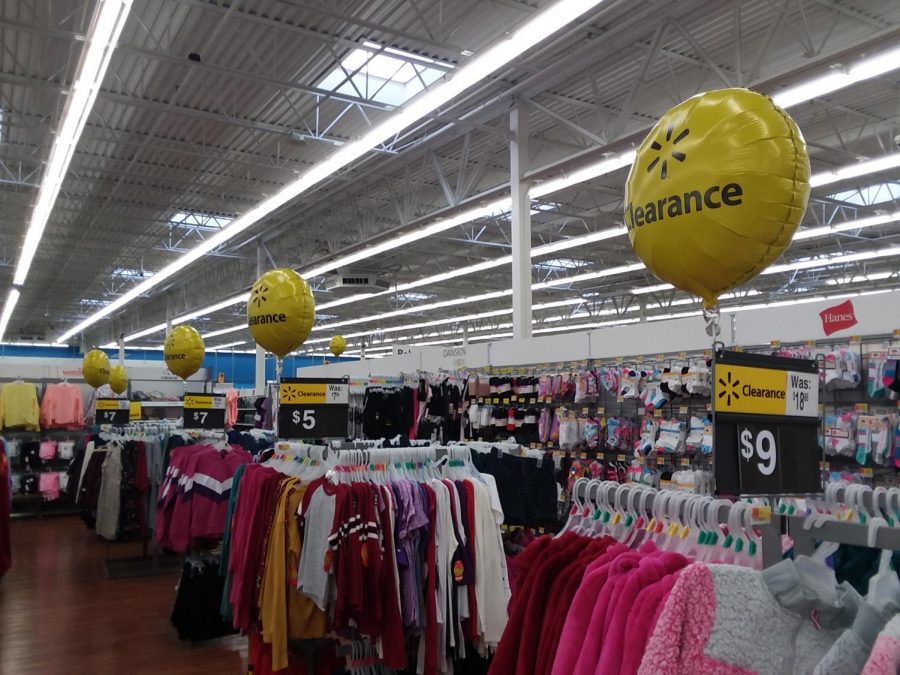 A look at Walmart's clothing department shows that it too is favoring fast fashion in order to hopefully compete in the new fast paced clothing market.

What is fast fashion?
Fast fashion is a newer idea that retailers have jumped on. The aim is to produce new, trendy, cost efficient, clothes as fast as possible to hopefully satiate the public’s hunger for new styles. The whole idea of fast fashion is based on the assumption that people want high fashion clothes at a low price.

Fast fashion brands have mastered how to cut down the design, production, delivery, and ultimately the cost of clothes. Some examples of these brands are Zara, Forever 21, GAP, UNIQLO, and H&M.

Fast fashion has become so lucrative that traditional department stores are also trying to replicate the idea. For example, Macy’s, J.C. Penney, and Kohl’s are jumping on the wagon that is fast fashion, by shortening their design and production times to hopefully compete in this fast paced market.

Fast Fashion is challenging the traditional idea of releasing clothes on a seasonal basis by creating around 52 “microseasons” where they release a new collection of clothes roughly every week. These stores have a towering amount of stock, or merchandise, and instead of reproducing that merchandise when it sells out, they create a whole new “collection” to sell instead. This forces the public to buy what they see, when they see it, for fear of not being able to buy it later.

How it affects the environment
Fast fashion brands are trying to mass produce clothes as cheaply as possible, however in order to do this, these companies have to cut corners on material quality. These companies end up using materials such as lead, harmful dyes, and other toxic chemicals.

This becomes even more of an issue, when the amount of clothes that are thrown away in the United States alone amounts to 11 million tons. Because these clothes are made out of materials that are not environmentally friendly, they don’t break down and can last for years in a landfill releasing toxic chemicals in the environment.

How it affects people
Because these companies are trying to mass produce clothes as cheaply as possible, they’re also cutting costs on labor. Fast fashion companies are paying their workers pennies on the dollar. Fashion Nova, one of the most popular fast fashion brands, has allegedly been paying their workers $2.77 an hour in Los Angeles, California. Just as a reminder, the minimum wage in California is $12.00 an hour. Fashion Nova has also been guilty of paying workers by the amount that they produce and not hourly. The workers are paid roughly 20 cents for each shirt they sew. Again, this company has its factories in Los Angeles, not a developing country.

Most workers don’t even get a guaranteed hourly rate. They are paid by how much they produce. The New York Times previously interviewed Ms. Cortes, a woman who worked for Fashion Nova, sewing clothes, for several months. She was paid 4 cents for both sleeves, 5 cents for both side seams, and 8 cents for the seam on the neckline.

How are companies like Fashion Nova getting away with paying their workers shockingly low? Plausible deniability. Legally, companies can’t be charged with wage theft, if they can credibly claim that they had no idea their workers were being paid criminally low wages. In order to do this, companies can’t employ these people, but they can turn a blind eye when the factories they use treat their employees this way.

Can the average American afford good clothes?
According to The Financial Best life, theoretically, a reasonable amount to spend on clothes is 5% of your monthly income, or 5% of your yearly income. The question then becomes, can the average American buy good quality clothes with a reasonable budget based on their income? The median yearly salary in the United States is $47,060, however in service occupations the median salary is $30,524 and the median salary for professional occupations is $66,820. If we follow that 5% rule, a reasonable amount to spend based on the median salary for the United States would be $2,353. For service occupations the budget would be $1,526.20, while professional occupations have a budget of $3,341.
While there’s no average cost for good quality clothes, there is an average of how much money Americans spend on clothes. Americans who are 25-34 years old spend about $1,932 a year on clothes, while Americans who are 35-44 years old spend about $2,508 on clothes.

Having $2,000 dollars a year to spend on clothes is actually more reasonable than it sounds. Can you build an entire wardrobe for the year with $2,000 dollars? Probably not, however $2,000 is a reasonable budget to maintain a wardrobe, or to slowly build it throughout the years.

Let’s apply this concept. In order to build a wardrobe, you have to understand that you need clothes for warm weather, cold weather, undergarments, professional outfits for work, and shoes. You need all of these clothes, while keeping in mind that it isn’t well accepted in society to wear the same clothes two days in a row, or even within the next five days of when you wore it last. Just a reminder, this will be a rough estimate to simply see whether or not it’s possible to build an entire year’s worth of wardrobe with $2,000.

In order to determine whether or not $2,000 dollars would work with “good” clothes, I’ll be avoiding fast fashion companies as I make my pretend purchases. After doing some research, I discovered the clothing company Everlane produces and sells ethical clothing.

First, I started with the professional clothes. I bought one blazer ($195) and a pair of dress pants ($50).
Next, I decided to look for jeans, as they could theoretically be worn both in summer and winter. I bought a pair of black ($68) and a pair of white ($68) jeans.

Finally, I looked for undergarments. I bought five sets of undergarments ($200) and a set of pajamas ($180).
In the end, with 31 items, I surpassed the $2,000 budget by $15. Although I was well within what someone working in a professional occupation could afford, I had gone a whole $500 over the budget for people in service occupations.

What does this all mean?
Fast fashion companies are successful. Their success comes from the fact that they are extremely affordable. However, their affordability comes from destructive practices.

Because of their success, and the way these companies are promoting themselves through celebrity endorsements, promising fashionable clothes at a low price, they aren’t going anywhere any time soon.

The only way to stop these unethical practices is to stop buying from fast fashion companies. Could that reasonably happen?

With the demand to look fashionable, but with no money to afford ethically made clothes, people are turning to fast fashion companies to achieve this look. The only way for people to stop buying from these companies is for the perception about clothes to change.

So could we as a society reasonably stop buying from fast fashion companies in the near future? The answer is no.